Startseite Blog “Your Word Means Something” 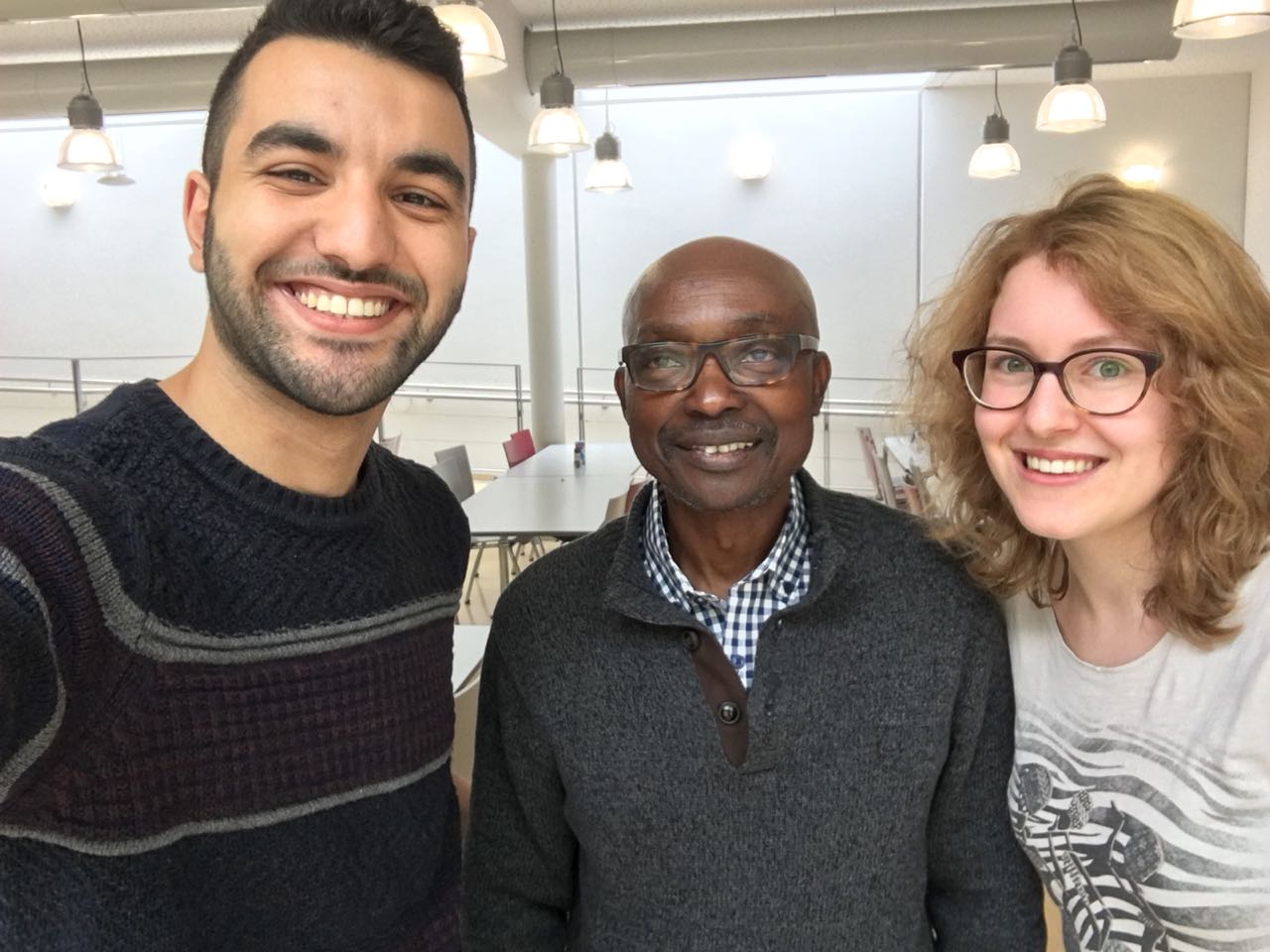 “Your Word Means Something”

Students: Can we start with a short introduction of yourself.

Pr. Dr. Geoffrey Ekegwu: I am originally from Nigeria and I moved to the US in 1976 to study. I worked as an engineer, starting at General Motors and did some defense work for about 7 years, went back to engineering research in a technical center and from there I went on to teach. I taught at James Madison University (JMU) from 1993 and now I teach part time at the Ohio State University and the Eastern Mennonite University.

Students: What kind of cooperation is there between the JMU and HTW Saarbrücken? The DFHI?

Pr. Dr. Geoffrey Ekegwu: JMU has a partnership with HTW. We started bringing students from my program to the HTW about 12 years ago. 10 to 15 students per year. It is hard to bring German students to the US because of the tuitions, but we came up with a solution: we bring German students over who want to discuss their thesis, and the staff from our university volunteers to supervise them without registering for the semester so they do not have to pay tuition. I currently have a course with the students from the DFHI who are in Saarbrücken. I took the class of Dr. Bousonville when he became the director.

Students: How did you get involved in this program?

Pr. Dr. Geoffrey Ekegwu: Well, I have supervised quite a lot of students coming from Germany. Then the HTW invited me over. We started talking with some faculty members and found out that there were some areas I could help them with, so I started teaching at the engineering college for about 3 years, then I started teaching another program here in the business faculty.

Students: Which courses are you teaching at the business school?

Students: Where do you see similarities and differences between France and Germany, especially with regard to the DFHI?

Pr. Dr. Geoffrey Ekegwu: Even though they are so close, and they speak each other’s languages, the cultural interlocks between Germany and France are interesting. At academic level, you see similarities and differences. I worked in the US as an industrial with some French companies. I had a different impression of French people at that level than I have with students. The French were very aggressive in terms of taking ideas from you. You think you are going to collaborate with them, you come out they are competing directly with you.

Students: What are the main differences between the American education system and the German one?

Pr. Dr. Geoffrey Ekegwu: American students sleep in class and German students talk in class; but the similarity is that both are always using their cell phones. The difference teaching in the US, you are constantly having an assignment that you have to do on a weekly basis. Sometimes, there are two or three middle exams and the final exam. But here it is only one final exam in most cases.

What I have noticed is that some students don’t take the fact that it cost someone money for them to study seriously. They register for a class and don’t put in any effort, they go and try to take the exam knowing they are going to fail and then they take it again the next year and they are serious. If a lot of students do that they block the registration or the available space for other students. That is a negative aspect of the system. In the US if you fail, your money is gone and you have to pay to retake a class. It might mean even that the class is not available next semester which means another year until you can take it, which prolongs your time at school and costs more and if you are borrowing money to go to school we are talking about something like $60,000. The serious students always want to do well the first time around.

Students: What about the relationships between teachers here and in the US?

Pr. Dr. Geoffrey Ekegwu: Here, because I am a visiting professor, the professors that I work with are very generous. I am not fighting for a position. As opposed to my school, where you don’t get along with everybody. There are connections in the US, but my school is big, we have about 22,000 students. So, there are a lot of people in there and the system for promoting faculties is different there. You have to come and start at an assistant level, then you get promoted to an associate and from there you become a full professor. These are the bridges you have to cross. Because of that people act differently and everyone is trying to do things that get them recognition.

Students: How do you deal with the intercontinental cultural experience?

Pr. Dr. Geoffrey Ekegwu: As far as I am concerned, as soon as I came here I noticed a high level of curiosity in all generations. Germans know more about America than Americans about Germany. Americans don’t travel outside the US much. There are a lot of Americans that don’t really have knowledge about what is going on out there in the world. The Germans know more about the politics in the US.

Students: With the current tensions between Europe and the US concerning the economic trade agreement, do you think that they could be also negatives effects on other educational cooperations?

Pr. Dr. Geoffrey Ekegwu: I don’t think so. A number of Americans live around here. There are number of military bases that we have in Europe. I don’t think it is possible to come and end all that. On the other hand, when Europeans come to America, most of their grandparents came from here anyway. So, there is that warm reception. Your students, when they come to my school, they don’t want to go back. One surprise is that from the very first day, someone stops and talks to them. That’s not common in Germany. In France maybe it’s different. Americans as soon as Americans pick up an accent, they immediately start a conversation. The students feel welcome.

Students: Would an exchange program with DFHI students be possible?

Pr. Dr. Geoffrey Ekegwu: Yes, we talked about it and the difficult thing to work out is the tuition stuff, we talked to the school of business and they had some serious discussions about it.

Students: If you could, how would you change the German education system?

Pr. Dr. Geoffrey Ekegwu: Nothing, because I think the German system works for them. At the earliest stage from what I understand, that’s a test that is done. The benefit of is, that the German system directs people to where their strengths are; and they can follow exactly what they really want to do.

Students: Which aspects of German culture have affected you most? Which do you like, for example, the food, people, parties?

Pr. Dr. Geoffrey Ekegwu: Oh I’m too old to party. The beer is not bad, and the fact that it is close to France, that I could sneak across to France and drink some good wine.

One thing I like about Germans is that you know where they stand and their particular issue. If they don’t like you, you know; if they say they will meet you for something, they will; they are more trusting than people in the US. And their attention, the time, they are very organized. If they agree on something, then everybody does what has been agreed. In the US, somebody will still be arguing “why do I have to do it” and start questioning the decision. And Germans are very punctual, and I think the system is still built on the idea of “your word means something”. If you can scrape through the layers of a German’s personality or soul, if you can see what’s inside, inside Germans are very good and if you become friends with them, it’s for life. There’s nothing they wouldn’t do.

Students: Thank you very much for taking part in this interview.